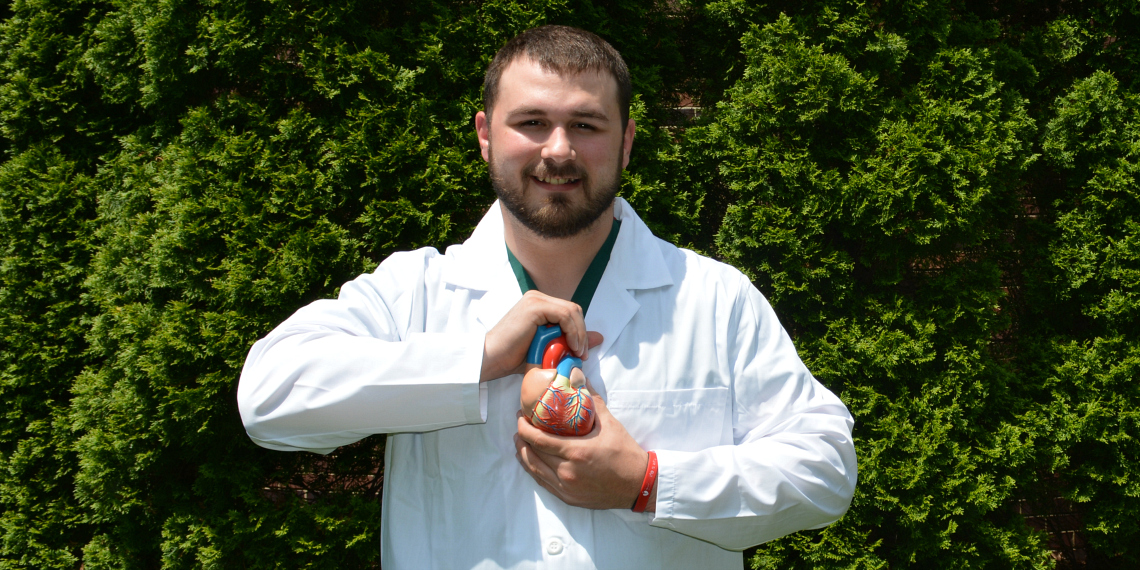 In more ways than one, Joseph Mannozzi’s heart led him to Wayne State University.

Growing up about an hour outside of Pittsburgh, athletics was a big part of Mannozzi’s life. He participated in football, baseball and wrestling, among other sports. He never knew his heart was a ticking time bomb — not until age 12, that is, while he was doing wind sprints before a wrestling meet.

“All of a sudden, it was like getting hit by a brick in the chest. I collapsed to the floor, yelling in agony,” said the now 25-year-old Mannozzi. “My dad, who used to go to all my practices with me, and the coach ran over to me and felt my chest. They said it felt like my heart was going to burst out.”

After being rushed to the hospital, Mannozzi was diagnosed with atrial septal defect (ASD) — a hole in the wall that separates the top two chambers of the heart. ASD allows oxygen-rich blood to leak into the oxygen-poor blood chambers in the heart.

It’s estimated that one in 770 people are born with ASD. Many babies born with the defect do not have symptoms, and smaller holes can close on their own. Mannozzi wasn’t so lucky.

He and his family opted not to get the surgery because it would have required going on a blood thinner medication. For a 12-year-old who enjoyed being active and running around, it meant a lot of scrapes and cuts could lead to severe bleeding.

After the diagnosis, Mannozzi delved into his heart defect. Around age 15, he began researching everything he could. Some of that curiosity was influenced by self-preservation. He wanted to be able to explain what was wrong with his heart to teachers, coaches, EMTs or anyone else who might have to understand his condition. But the diagnosis and learning about the heart at an early age drove Mannozzi to seek further understanding of cardiovascular system functions and what occurs to the heart in states of defect and disease.

“I became interested with learning how the heart works. Why do I have this ailment? What’s the cause of this?” Mannozzi said. “I dug into as many things a 15-year-old kid could find about cardiovascular research and biology. I took advanced courses in high school related to anatomy and physiology because I wanted to understand the cardiovascular system better.”

Mannozzi earned his bachelor’s from Edinboro University of Pennsylvania. He started as pre-med with a goal of becoming an interventional cardiologist. He shadowed doctors, but when he would hear about new therapeutics that came out for individuals, it caught his attention.

“That’s more research-based, not patient-based. I started to spend a lot of time in the lab and found I liked it a lot,” Mannozzi said. “For me, research was a more rewarding avenue.”

After graduating from Edinboro, Mannozzi did a one-year stint at Louisiana State University for his graduate degree. While he believes that both the school and the program are great, he wasn’t doing what he wanted to do with cardiovascular research, and he began looking into other institutions that had a strong physiology program.

In 2016, his search led him to Wayne State’s Department of Physiology in the School of Medicine. Now, as a Ph.D. candidate, he focuses on cardiovascular research and complications that occur in disease states, with the goal to relieve or prevent cardiovascular diseases. His primary studies involve heart failure and hypertension.

“Wayne State’s Department of Physiology is a leader in not only the study of heart disease, but also teaching and training the next generation of physicians and researchers,” Mannozzi said. “If I could find a way to fix something in the field of cardiovascular research and all the related categories, I could help one million people at once. I want to try to fix the problem before a physician has to work on it. They say you should never work on what you’re affected by. But for me, it’s an intrinsic driver.”

Mannozzi recently completed his coursework with a 3.8 GPA and now has two years of dissertation remaining. This fall, he will undergo surgery to repair his heart defect. He expects to return to Wayne State within a month or so after recovery.

Fortunately, Mannozzi hasn’t had to make the move to Detroit alone. His girlfriend, Kristin Richardson, is also working toward her Ph.D.  in Wayne State’s Department of Physiology. The two had met during their undergrad days at Edinboro University.

In May, Mannozzi was one of thousands of people who participated in the American Heart Association (AHA) Metro Detroit Heart and Stroke Walk/Run event on Wayne State’s campus. As one of the longest-running walks in the metro Detroit area, the event raised nearly $1.5 million for research and community awareness. Proceeds from the Metro Detroit Heart Walk go directly to the AHA for cardiovascular research and heart health educational programs, locally and nationwide. The Heart Walk is still accepting donations until June 29 at noon.

“The American Heart Association helps fund our faculty and trainees, so a small contribution to the AHA’s mission helps support a future of cardiovascular health. They are a big component of the strides we’ve made in research and medicine,” Mannozzi said. “Imagine the impact it would have if we could reduce death and disability from cardiovascular diseases and stroke by 20 percent by 2020.”