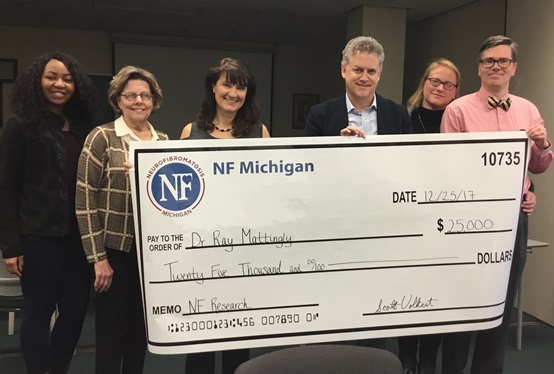 Three Wayne State University School of Medicine faculty members from different disciplines are teaming to launch their first large-scale investigation of cutaneous neurofibromas, a hallmark of neurofibromatosis, a genetic disorder of the nervous system that causes tumors to form on nerves anywhere in the body at any time.

Professor and Chair of Pharmacology Raymond Mattingly, Ph.D.; Department of Obstetrics and Gynecology Professor Doug Ruden, Ph.D., who is also director of Epigenomics at the Eugene Applebaum College of Pharmacy and Health Sciences' Institute of Environmental Health Sciences; and Associate Professor of Pediatrics Joanne Wang, M.D., Ph.D., will use a $394,370 grant from the Neurofibromatosis Therapeutic Acceleration Program at Johns Hopkins University in Baltimore for "Deconstruction and Reconstitution of NF1 Cutaneous Neurofibromas."

Dr. Wang is a physician who cares for children with NF1.

NF is unpredictable, with no known cure, but the genes for NF1, one of three distinct forms of the disorder, has been identified, according to NF of Michigan. The tumors begin in the supporting cells that make up the nerves and the myelin sheath - the thin membrane that envelops and protects the nerves. The disorders cause tumors to grow on the nerves and, less frequently, in the brain and spinal cord, and produce other abnormalities such as skin changes and bone deformities. The progressive disorder is the single most common genetic disorder of the nervous system, occurring in one in every 2,500 to 3,000 births.

Dr. Ruden is an expert on single-cell sequencing, the cutting-edge genomic approach they will use for the project, which stems from pilot work supported by a gift from Neurofibromatosis Michigan.

"I have been working with Doug Ruden for about three years on a related NF1 project. He told me about how he was bringing the advanced single cell sequencing technology to Wayne State, so we decided to develop that for this new project," Dr. Mattingly said. "I have been consulting with Dr. Wang for many years due to her clinical expertise with NF1 patients, but this is the first time that she has been a formal co-investigator on one of our projects."

The NF Michigan organization provided $25,000 to the scientists earlier this year for research from funds previously raised at the Miles 4NF Walk held last June.

Dr. Mattingly has initiated two new projects because of the donation.

The next fundraising walk will be held June 23 at 9:30 a.m. in Drake Sports Park in West Bloomfield.

"It would be great to have a strong turnout to show support for local patients and families that are dealing with this disorder," Dr. Mattingly said.

"I had recognized these as a serious problem for many NF1 patients and noticed that there was very little research done on them to find treatments," he said. "(Support from NF Michigan) makes a huge difference to us by allowing the development of new directions and ideas for how to develop treatments for NF1 patients. It is almost impossible to do that without initial seed funding."