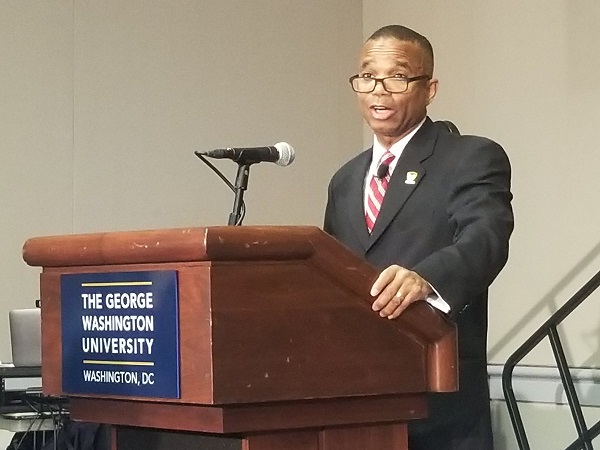 Fifty years ago this March, the Kerner Commission, appointed by President Lyndon Johnson, issued a seminal report on racial division and disparities in the United States, produced in response to civil unrest that raged across the country. In the 1968 report, the commission concluded that, "Our nation is moving toward two societies, one black, one white - separate and unequal."

On Feb. 27 and 28, the findings from an update to the original report were released at two Washington, D.C., events. The report, "Healing Our Divided Society: Investing in America Fifty Years After the Kerner Report," examines what has happened over the last 50 years in our schools, our neighborhoods, our prisons, our health care system and our nation, and what work remains to be done to heal our divided society.

Herbert Smitherman Jr., M.D., M.P.H., vice dean of Diversity and Community Affairs for the Wayne State University School of Medicine, was asked by the Eisenhower Foundation and the Economic Policy Institute in Washington, D.C., to write the chapter on health outcomes for the new report. He presented and discussed his findings Feb. 27 at a national forum of the Kerner Report update on a panel with Jared Bernstein, former chief economist and economic advisor to former Vice President Joseph Biden.

Dr. Smitherman, with Anil Aranha, Ph.D., academic associate director in the School of Medicine's Office of Diversity and Inclusion, wrote the chapter titled "Fifty Years since the 1967 Rebellion, Have Health and Health Care Services Improved?"

The report's findings indicate that today many of the same issues plague the country, and concerns over civil rights, racial division and racial disparities are, in many ways, more pressing than ever.

"There is still far too much discrimination on the basis of race in America," Dr. Smitherman said. "Racial and ethnic disparities in health continue to widen. These disparities are consistent and extensive across a range of medical conditions and health care services, and are associated with worse health outcomes in communities of color. These disparities are associated with socioeconomic differences and tend to diminish significantly, when socioeconomic factors are addressed. People in each ascending step along the socioeconomic gradient tend to have better health. Therefore as wealth and income improves so does health. Addressing the social determinants of health therefore becomes important toward improving health."

Among the report findings:

• Housing and schools have been re-segregating.

• The percentage of American children living in poverty increased from 15.6 percent in 1968 to 21 percent in 2017. "Our child poverty rate is the highest among industrialized democracies," Dr. Smitherman said.

In addition, income inequality has increased in the past 50 years.

• In the 1970s the richest 1 percent of Americans took home less than 9 percent of national income. By 2016 they took home 24 percent.

• A mass incarceration system and prison-industrial complex has increased the American prison population from about 200,000 at the time of the Kerner Commission to about 1,400,000 today. The prison population is disproportionately minority. African-American men are nearly six times as likely to be incarcerated as white men. Hispanic/Latino men are 2.3 times as likely to be imprisoned. The United States has by far the highest rate of incarceration among industrialized democracies.

"Whereas the Kerner Commission called for 'massive and sustained' investment in economic, employment and education initiatives, during the last 50 years America has pursued less and less investment in these initiatives, especially in poor and minority communities," Dr. Smitherman said. "We have therefore not seen substantive and broad improvement in the relative conditions of people of color over the past 50 years."