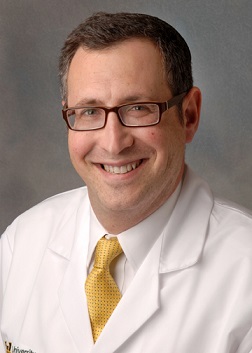 A Wayne State University School of Medicine physician researcher next month will be honored with an award received by more than 10 Nobel laureates and other distinguished scientists.

Gabriel Sosne, M.D., associate professor of Ophthalmology and of Anatomy and Cell Biology, has been selected to receive the 2017 Abraham White Lifetime Science Award from George Washington University. The award honors individuals who have made unique contributions to science and medicine.

Dr. Sosne is being honored for his work with Thymosin beta 4 in the healing of ocular damage. He will receive the award during the fifth International Symposium on Thymosins in Health and Disease, taking place Nov. 15-17 at George Washington University.

"I am humbled and honored to receive the 2017 Abraham White Lifetime Science Award. As a clinician scientist, the opportunity to participate and contribute to alleviating human suffering is both a humbling and awesome task and responsibility. I am most appreciative and grateful to my mentors, colleagues, post-docs, students and laboratory personnel who contributed so much to this milestone," Dr. Sosne said. "As a tribute to the amazing individuals who have guided and supported me along with my brilliant colleagues and students who have contributed and collaborated with me over the years, I am particularly grateful to Drs. Linda Hazlett, Gary Abrams and Mark Juzych here at Wayne State for their assistance in my research efforts to make Thymosin beta 4 a major potential new therapy for corneal wound healing disorders. Together, we have taken steps down roads that many never thought we would go in a journey marked by the thrilling exhilaration from fundamental breakthroughs in the laboratory and clinic."

He also expressed appreciation for the opportunity to work in the lab of Hynda Kleinman, Ph.D., at the National Institutes of Health two decades ago.

Thymosin beta 4 has important applications in ocular repair, Dr. Sosne said. The focus of current clinical trials has been on dry eye and on neurotrophic keratitis, because the many mechanisms of action of Thymosin beta 4 address the underlying causes and pathologies of these disorders. Thymosin beta 4 promotes corneal epithelial cell migration, reduces inflammation and inhibits apoptosis, or cell death.

"The successful application of Thymosin beta 4 in dry eye disease would represent a major step forward from current treatment options," Dr. Sosne said. "In turn, the potential therapeutic benefit in several other ocular surface disorders may follow. These exciting clinical possibilities for Thymosin beta 4 in the eye are the result of numerous seminal basic scientific discoveries and contributions from so many talented investigators. The electrifying possibility of Thymosin beta 4 as a revolutionary novel dry eye therapy is something that could have only been dreamed about just a few years ago. Ultimately, our success will be measured by the number of patients whose suffering will be relieved and helped by our efforts to make Thymosin beta 4 a clinical reality."