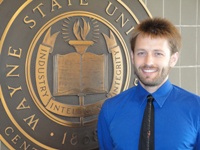 A Wayne State University School of Medicine student captured first place for his presentation at an international workshop on epilepsy.

Erik Brown, a fourth-year M.D./Ph.D. student, competed in the Data Blitz during the High Frequency Oscillations in Cognition and Epilepsy conference June 4 at the Montreal Neurological Institute. His first place finish brings him an $800 (Canadian) prize.

"I was a little bit amazed and felt kind of humbled," said Brown, 29. "My research mentor (Eishi Asano, M.D., Ph.D., associate professor of Neurology and Pediatrics) was sitting in the first row, so I was extremely glad to make him proud in front of the international leaders of his field. I was appreciative that he took me with him and gave me the opportunity to present my Ph.D. work in such an exclusive setting. I know he was very happy because when we got back to Children's Hospital on Monday he had already told everyone in the office about our success over the weekend."

Brown and the other competitors had just six minutes to present their research during the Data Blitz. Boiling down an entire medical research project into less time than it takes most men to shave was a challenge, he said. He practiced with his roommate several times each evening during the days leading up to the challenge.

"It was very difficult to select and package all the essential background and data into a concise six-minute presentation and still make it clearly understandable. My practice really helped for the real thing, although my actual presentation was greatly modified compared to how I practiced it," he said. "Actually, when I practiced it, I never got within the six-minute time period. During the real thing, though, I eliminated some unnecessary information and spent slightly more time on essential information and was able to get it all out in about five minutes and 30 seconds. I think most people understood it. Man, in six minutes, you don't have time for any mistakes."

Brown's research team works with epileptic children undergoing a surgical procedure in which a portion of brain tissue is removed. To prevent post-operative problems, it is crucial to map areas of brain function, such as language centers.

While electrical brain stimulation remains the clinical "gold standard" for brain mapping, Brown said research has indicated that it may have reduced effectiveness for language mapping in young children. To overcome that obstacle, his team has studied brain language centers and published on its use of an "auditory naming task" in mapping language with electrocorticography, an intracranial version of EEG. The technique allowed the team to identify the language components of auditory, cognitive and sensorimotor function.

He presented the team's validation of an auditory version of the classic Sternberg Working Memory Task. The team dissected the cognitive naming task components into those attributable to working memory and those that are not.

"Our techniques may enhance our understanding of language processing in the brain as well as lead to improved methods of language mapping for epilepsy surgeries in children," said Brown, who this week is volunteering with Africans in Medicine in Haiti. "We plan to perform these mapping tasks in more patients and publish our findings within the next two years.

He became interested in neurology because of his own experiences with epilepsy.

Brown, who hopes to become either a pediatric neurologist with expertise in epilepsy or a pediatric neurosurgeon, was approved for Ph.D. candidacy in March and is now working toward his dissertation. He plans to graduate in 2015.